This section shares my personal evolution of panoramic photography of a landscape.

How I started shooting panoramic

When I am not working and it’s not over 100 degrees outside;  I spend a lot of my time on the trails hiking and biking.  Over the last few years I have completed about 200 of the 800 mile Arizona Trail.  As a photographer I can’t resist photographing the amazing scenery. Panoramic photography seemed inevitable. 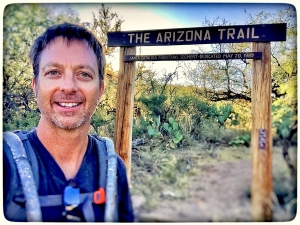 Jason Koster in front of an Arizona Trail sign.

Most of the time you can capture the gist of a landscape with a single frame but hardly the expansiveness or what it feels like to be a passenger on the land.  For most people when you point a camera at majestic scenery the experience quickly becomes what part of the scene am I ok with cropping out.   I call this passive framing. The resulting image usually ends up feeling incomplete or like there wasn’t much of a story at all.

As I was preparing to hike the part of the Arizona Trail that goes through the Grand Canyon I knew it was time to start figuring out how to capturer a bigger scene.   That’s when I started to explore panoramic photography. When shooting panoramic landscapes I discovered I was no longer limited by a left and right frame.  Instead of deciding what part of the landscape has to get cropped I am now asking, where does the picture start and where does it stop?  The picture could be as long as it needed to be to tell the story.  This approach brought the entire landscape into new perspective. I could feel the story telling quality developing in these images.  Including more of the land not only said more but it allowed the land to become more poetic in what it was saying.

I find story telling to be an element of a successful image.  The sun and clouds can be an easy source of drama for an image so I try to use those elements sparingly.  Similar to outgrowing the rockabilly costumes of my Natural Light Portrait series I stopped making landscape images about the sun & clouds.   But when dramatic light is unavoidable what does it mean?  I have always considered sunshine to mean growth and prosperity.  Lens flare evokes excitement, challenge and chance.  Seeing the entire sun??  Well that was new for me because most of the time in photography we don’t include the sun.  To me it represents time and honesty.  It is the thing I am racing to my next camp.

Eventually showing the trail was inevitable.  I thought it might be visually distracting but, I was pleasantly surprised by how much it added to the story telling. Showing the trail eventually meant showing other hikers. That brought scale to the scene and more meaning to the trail.  The trail became a symbol of finding ones way in life or reflecting on the past. A hiker on the trail represented the work one puts in for a better life.  I tried not to think about the trail being a man made scare on the land but, rather the land designating were it can be used.

If the sun symbolizes time and honesty then what is the shadow?   To me shadow feels like transition or something heavy like regret. But seeing my own shadow took on a completely different meaning.  The image was no longer from an omniscient viewer looking outward. My shadow seemed to say this is your current status and the scenic view was looking inward.

What use to just be a nice picture of the land has now turned into something much more expressive to me.  Lastly, even the different textures of the land start taking on different meanings, attitudes or phases of life.

Being open to panoramic images has lead me to the less common vertical panoramic photography.  This is an area that is still young to me and I am looking forward to further exploration.

I am very proud of my John Muir Trail series.

I wanted to include this gallery of Early Landscapes because these are my learning pieces that prepared me for making much more intelligent panoramic photography of the John Muir Trail.  It was this work that allowed me to see the expressive potential of a landscape image.  I knew it would be important for me to go to the extra mile to shoot high quality images.

Just for Fun
Scroll to top