Pivot Cycles USA is one of the most elite manufacturers in the world in the competitive off-road cycling industry. Read below how Phoenix product photographer Jason Koster produces studio images inside the Pivot factory to meet the requests of his client.

As a Phoenix product photographer I figured we would be working in a photo studio when photography discussions first began with Pivot Cycles.   Due to the sensitive nature of these bikes the client would not let them leave the Pivot facilities.   Pivot Cycles is an elite leader in world class off-road cycling. Their innovative designs & technology are on the cutting edge and heavily guarded.  Most of the bikes I was photographing were prototypes and had not been released to the public yet.

Product Lighting in a Factory

I noticed the lighting while scouting the factory for places to shoot.  Being in an active factory we were not gonna be able to turn the lights out like when shooting in a studio.   The color temperature of the light is usually one of the first things a photographer notices when scouting a location.  In most industrial settings there is a mixture of color temperatures happening. Sodium vapor lights are orange. Mercury vapor lights are green. Florescent lights are usually blue or green. Not to mention any possible blue/green sky lights.  These industrial light sources can affect the color accuracy of a photograph.  I was able to use strobe lighting and overpower the factory lights.  Dialing in accurate color is important in a product shoot. Sounds like blog post waiting to happen.

Working with the Client

We were able to clear out an area amongst the workers and create a small shoot space. It turned out to be a good thing we were in their factory.  Some of the bikes were so new they had to borrow parts from other bikes to make a complete bike for the shot.  It was great working side by side with the client. Clients breath a little easier when they see the images come up on the computer screen.  Everybody loves to make sure they were getting exactly what they wanted.

One of the most important parts of these high end bikes is the geometry of the frame and suspension placement.   Some bikes are made for cross country trail ridding and other bikes are made for more extreme downhill riding. It was important to my client that we find some standardized angles.  This makes it easier for viewers to see the differences in geometry from bike to bike.  We also came up with a rack that would not only hold the bike but it would allow us to move the bike around as needed.

Because of the quick turn around time there was not much time for retouching so most of these are straight out of the camera.  It was only the full bike shots that required any post work. 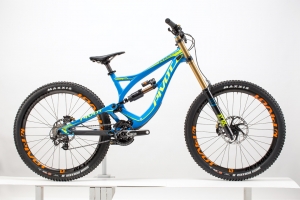 A normal lens was used for the profile shots so as not to create distortion. But the normal lens for the 3/4 angle shots was just a little too wide.  It started to make the front tire look like it was bigger than the back tire.  I ended up using a slightly telephoto lens to create a little more compression.  A true telephoto lens would have made it cumbersome to keep a bike sharp from end to end at that angle.  It can be done but the process would have slowed down production considerably.

Some of the parts on these bikes that needed to be photographed were so small that some macro photography was required.  In macro photography your depth of focus is consideraby reduced, this requires the aperture to be stopped down more which requires more light for a good exposer. I called upon my experience with lighting cars when it came time to photograph areas with glossy paint.  I’ve always said if a photographer can light skin as well a glossy items then they can light just about anything.