Phoenix Fine Art photographer Jason Koster creates a  photography series of the seed pods to the Devil’s Claw plant.  Read below as Jason shares how this still life project turned into portraiture.

Devil’s Claw is a ground cover plant found in deserts all over the world. The seed pods come in a variety of shapes and sizes but, it’s not hard to tell they are related.  The Devil’s Claw seed pods in this series are about 5 inches tall and come from the Sonoran Desert of Arizona.  The pods start out looking like  harmless, fuzzy squash. Early settlers use to pickle and eat them. Eventually, they shed their exoskeleton and  split open to create the ‘arms’ with hooks.   Like most desert dwellers, they are pretty hardy.  They feel like wood and certainly not anything you would want to step on with a bare foot. They propagate by latching on to animals passing by and the seeds spill out of the top or in my case they latch on to your shoe. Devil’s Claw is also known for having a variety of medicinal uses such as anti inflammatory and aiding digestion.

Digging deeper into being a Phoenix Fine Art Photographer

A number of people have asked if I ever considered teaching photography.  If I did teach, it would be a  photo-psychology class.  A class that looks at why we like the images we like and effectiveness of different photo techniques.  The viewer takes in more information from an image than most people realize.  If the quality & content of that image doesn’t support the subject then it becomes visual clutter and tends to lessen the chances of success for that image.  Similar to inefficient or inaccurate words in poetry watering down the point.

In the planning stages of the series I contemplated the best setting for the Devil’s Claws to be photographed. I wanted these images to be only about the Devil’s Claw but, any scene or surface I could imagine became a distraction.  A clean, white environment became an obvious choice but, what to do with the shadow was an unexpected journey.  Would the claws be leaning or laying on white? Is the shadow hard or soft, dramatic or inconspicuous?  Suddenly half the image becomes about what the shadow suggests. Who knew white could be so complicated? My solution was to photograph each claw free floating in front of white so there was no shadow to anchor. This seemed to support the ageless, timeless, genderless feel of each claw and amplify their expressive gesture.  This was no longer a still life series but, a portrait series.  A portrait series about individuality.   Like humans, the Devil’s Claws basically look the same but, still quite unique from one another.  Their individuality does not come from their possessions. The series turned into a daily visual mantra to not lose sight of oneself. 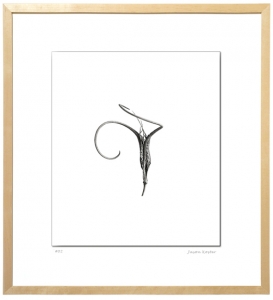 The Technical side of being a Phoenix Fine Art Photographer

I shot this series with the same 6x7cm medium format camera I used for my Natural Light Portrait series. Because these were still life’s I could have shot with my even larger 4×5 camera but, the quality would have been overkill and the cost about 10 times higher. Unlike a digital camera where you can simply look at the back of the camera or at the computer to check exposure and composition, when shooting a film camera we use high quality instant polaroid to check expose, composition & camera functionality. It usually takes a few polaroids to get an image juuuussst right and that also drives the cost up.

I did the scanning and printing of these images myself. The finished pieces are printed on 13×15 watercolor paper free floating against white rag board with a natural wood frame.  I find the excessive amount of white to be rather soothing. Some people have asked is they were pencil drawings.