This collection of fine art portrait photography created by Phoenix commercial photographer Jason Koster, has been compared to the works of such masters as Dorothea Lange & Richard Avedon.  Read more at the bottom of the page as Jason shares some of his thoughts & challenges in creating this series.

I studied commercial photography in design school not only so I could eat and pay the mortgage but, so I had the technical skills to make the fine art images I was passionate about.

The technical side of a Fine Art Portrait Photography

This series of fine art portraits was shot on film using a manual focus, medium format, 6x7cm, camera. I chose a lens with similar compression to the human eye. The aperture has just enough depth of focus to keep the viewers attention on the subject without distorting the environment.

Digital cameras are faster and easier to work with but, it is hard to beat the look & quality of medium format film. I chose a natural lighting approach to these images for a timeless feel. Instead of adding light to my subjects I was subtracting the sun light with the use of black fabric cards & fabric.

The series began with finding subjects at an annual outdoor, hot-rod and rockabilly event in Las Vegas.  After a couple years I found myself looking to create portraits that were more about the people and less about the costuming.   That’s when a college suggested I move my project to Burning Man.  For those that don’t know, Burning Man takes place on a dry lake bed. This event is notorious for it’s harsh, hot, windy, dusty, conditions.  The biggest challenge was figuring out how to recreate my portrait station with something I could carry on my bike. You are not allowed to drive your car around at Burning Man.  It was a fun challenge and that is how I came up with the portrait box.

The Process of a Fine Art Portrait Photography

The image below is my first mobile portrait box. It was four feet wide by four feet deep by five feet high. The sides were hinged so I could fold it up and carry it under my arm while riding my bike.   There were several other versions after this but, this image is pivotal in the series.  I had done all of my other portraits that year against black.  When I squared up my camera on Christine with her black hair and black dress against the black background,  all I could see was her face.   I had a white board as a background option so I put that in place.  It wasn’t until I got home and was reviewing my film that I saw the parallel between the portraits on white and the Devil Claw series on white.

They were both portraits in timeless space.

How the series evolved..

Later with the addition of a baby trailer I not only gained cargo space for my camera and supplies but, I was able to create other mobile portrait boxes that addressed stability and heat issues. This also allowed me to explore other lighting techniques.  The makeshiftness of it all fit right in at the Burning Man scene and was quite a lot of fun.

The image below is the backside of the last portrait box I made. My subjects enter through the other side and face outward. The white silk background created what I called a hyper white.  It was not as classical as the earlier looks but, I found it refreshing for the series.  This portrait box also folded up and was attached to the baby trailer for easy transport.  You can see how the gusting wind is blowing the background silk material into the portrait box and there is so much dust you can’t even see the horizon.  This would be considered a nice day. 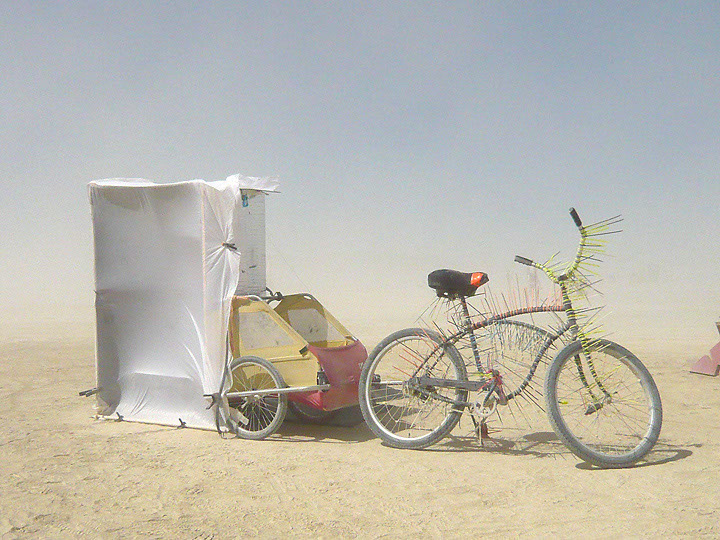 What this series means to me..

The series started with a somewhat classical approach to photographing colorful characters but, evolved into the beauty of raw, unguarded portraiture.